Air travel to resume between the USA and Cuba 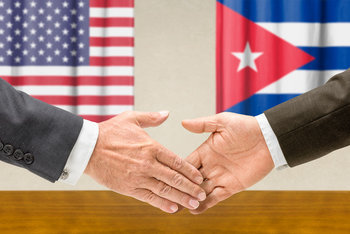 On July 20th, Washington DC and Havana will open embassies and restore full diplomatic relations between the USA and Cuba. Consequently, airlines and ship routes between both countries will be restored.

Since 1961, relations between the two countries have been turbulent, and their diplomatic missions have had to be conducted under the legal protection of Switzerland. Since ties were severed 54 years ago, after the USA imposed a trade embargo on Cuba, it has been notoriously difficult for Cubans to visit the USA and vice versa.

Nevertheless, it looks like this era is nearing an end. Barack Obama and Raul Castro, who held the first formal meeting between the countries in decades, have agreed to open embassies and continue air and sea transport routes between both territories. Of course, due to the minimal geographical distance between the two, the only alternative ways to get from one to another have been particularly inconvenient since relations were severed, with US citizens often flying north to Canada in order to catch a connecting flight.

So these circumstances beg the question, how easy will it be for Cubans to travel to the USA now? Could it be possible for the island to join a privileged list of countries that form part of the Visa Waiver Programme? The UK is on this list, meaning that its citizens can travel to the USA for up to 90 days at a time without the need for a visa; instead, they apply for ESTA online (Electronic System for Travel Authorisation) and are approved for travel within 24 hours.

Currently, the only other Latin American country to benefit from the ESTA, as part of the Visa Waiver Programme, is Chile, so it would be somewhat surprising if Cuba were granted the same privileges immediately. That being said, President Obama seems particularly keen to form and strengthen a relationship with its southern neighbour at the moment, so it’s not out of the question.

For the time being, the world will be keeping a close eye on how this potential diplomatic friendship evolves. Fortunately, the UK and the USA are as chummy as ever, and brits can travel to the USA for tourism or business purposes with nothing more than an ESTA and a valid passport. To apply for your ESTA online, simply fill out this online form and be informed of your approval within a matter of 24 hours.