Alaska is definitely well-suited to those who love adventure 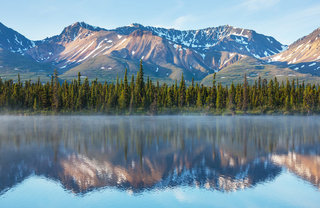 In the minds of its many visitors, Alaska is synonymous with wilderness and the end of the world, reflected in its nickname "The Last Frontier", as it is dubbed by other American States. Visitors tend to be those who love the most authentic forms of nature: vast spaces that alternate between clear blue glaciers to deep green vegetation, and that make man feel like an intruder in the presence of Mother Nature.

Organizing a trip to Alaska requires more meticulous planning than other regions, beginning with the time of year during which to visit certain places; throughout most of the year, the land hosts freezing temperatures and a lack of sunlight. The best time to enjoy acceptable temperatures is from late April to September, while if you want to enjoy the unique spectacle of the Northern Lights, you will have to visit Alaska during the winter and face up to the temperatures far below zero! Summer is warm, and with the phenomenon of the midnight sun, it’s easy for visitors to make the most of the whole day, but in some areas this period coincides with the time of maximum rainfall.

In any case, a trip to Alaska is definitely well-suited to those who love adventure. It is an unforgettable experience, full of surprises and emotions. Alaska is the land of the grizzly bear, the gold rushes, and pure nature. Much of the land is managed as a national forest, national park or a national wildlife refuge, which is exactly why the key word here, once again, is wilderness.

One particularly interesting way to learn about Alaska’s beautiful spots that are relatively inaccessible, is to paddle out into a maze of islands among the icebergs. One way to do this is with one of the many cruises in the Inside Passage (which is one of the five regions of Alaska, along with the Southcentral , Interior, Southwest and Far North). The Glacier Bay National Park, which is surrounded by sea, rugged mountains, glaciers and uncrossable rivers, is also the best place in the world for humpback whale watching, who fish and sing while occasionally performing acrobatic stunts out of the water. You can also watch sea lions, bears, mountain goats and over 200 species of birds here. It’s reachable only by small planes or ferries, which depart from the small village of Gustavus.

In general, the larger cruise ships cover the route between Vancouver (Canada) and Juneau, Alaska's capital, from which you can admire the glaciers from close-up. The view is breathtaking: the horizon is always surrounded by large mountain ranges, and the wildlife visible from the ships include humpback whales, killer whales, seals, sea lions, eagles and bears running in the distance, perhaps disturbed by the noise of the engines.

Another way to get around this area, as well as other regions, is via seaplane, which can also be considered the Alaskan taxi, as there are so many of them and they are indispensable for reaching many parts of the state.

Leaving behind the icy waters of the fjords, further north we arrive at Anchorage, the largest city in Alaska, which may seem somewhat "out of place” as a major urban hub where nature is the ruler! But the city is pleasant, with excellent restaurants and great shopping opportunities.

South of Anchorage is the Kenai Peninsula, an assortment of mountains, fjords, ice fields and glaciers, as well as the most popular recreational area of ​​the country. Many of the towns in this area are picturesque, such as Homer, a beautiful fishing village in Soldotna.

382 km north of Anchorage is the Denali National Park, where a few days’break is a must: here you can admire the lakes, forests and wading rivers. The Denali National Park covers over 6,000,000 acres (2,428,140 hectares), an area larger than the state of Massachusetts. Here lies Mount McKinley, the highest peak in North America (6,194 m above sea level). Inside the park you can stay in a wide variety of camps and lodges, and travel by train or bus.

The park is also famous because of the old, abandoned number 142 bus where, in September 6, 1992, the body of Christopher McCandless was found - a 24-year-old man who decided to move to Alaska, living on what he would find in nature, and whose story became the subject of a book and hit film called "Into the Wild" - consequently, the park has long been a "pilgrimage" destination for the increasing number of visitors who are passionate about his history. Some visitors, however, trace the path of McCandless without adequate equipment and expertise, and there are increasingly frequent calls for help coming from that area.

In general, it is not cheap to move around in Alaska, but a train journey can be the most affordable and impressive way to see the state. For example, you can take the journey between Seward and Fairbanks, passing through Anchorage. The panorama cars, of iconic yellow and blue colours, have huge windows that continue into the roof. Fairbanks is located in the valley of the Tanana River, near the Arctic Circle. It is not a real city, but a small urban centre dotted with houses with a truly charming atmosphere.

Our suggestions are just a taste of what Alaska has to offer, and is certainly a ‘different’ kind of trip, because being in Alaska is like being on another planet. So, there’s nothing left to do but put in the organizational work for an unforgettable experience, without forgetting to request your ESTA before you travel, which will be ready in just 24 hours!