Alcatraz prison reopens its doors to the general public 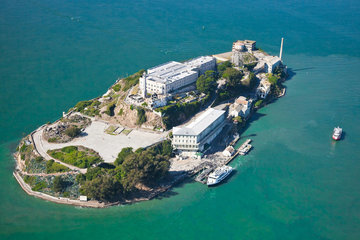 The historic prison of Alcatraz, located on the island of the same name in the bay of San Francisco, has just reopened its famous doors to the grand public.

Don’t worry! We are talking about the end of the former prison’s restorations (somewhere in the region of £2m), which had been going on for over a year. As well as restoring and modernising several buildings, the former Guardhouse was also made earthquake proof!

So, if you want to "escape" the monotony, prepare your travel documents (a valid passport and ESTA authorisation) and get ready for this fascinating experience!

Alcatraz, a small rocky island of about 9 hectares, located 2.4 km from the mainland, is one of the most frequented destinations by those visiting San Francisco and the west coast, allowing a glimpse into a historical and legendary facility. Since 1972, the area of ​​Alcatraz has been included in the Golden Gate National Recreation Area and the following year it became a place for sightseeing. Furthermore, as well as its historical importance, the island is of great interest for bird and nature lovers.

The island (whose name seems to be attributable to the seabirds that inhabited "la isla de los alcatraces"), nicknamed "The Rock”, has changed its face and function through the ages. A subject of interest for the Spanish explorers in the late 18th century, the island, in 1854, became the site of the first lighthouse on the West Coast, as the flow of ships in the bay became increasingly important during the period of the Gold Rush. The lighthouse was demolished in 1909 to make way for the prison and another was built elsewhere on the island.

Such a strategic position was naturally a temptation for the army, which, when fortifying the entire bay, built a fort in Alcatraz. The fort was completed in December 1859, and when Civil War broke out, Alcatraz had the primacy of the largest military fort west of the Mississippi, although its defensive function was never important.

In fact, given that wars are no longer fought in that area, the structure was converted into a prison. In the second half of the nineteenth century, the army began to send their strongest soldiers there who were guilty of war crimes. The final conversion into a military prison took place in 1909 when the guns were removed from the island: most of the buildings constructed after this date were built by the prisoners themselves.

The function of the military prison lasted until 1933, when the army ceded the island, including the fort, to the Bureau of Prisons (BOP), the US federal government that was in charge of prisons. This period coincided with the Prohibition, and American crime was at an all-time high. The US government had to send out a strong message, and building a modern, maximum security federal prison on a small, rocky island was the ideal solution.

The facility acted as a federal prison from 1934 to 1963, when maintenance costs became unsustainable (even drinking water had to be brought across on boats). The last prisoners left the island on March 21, 1963.

But what was so special about this prison that made it so famous in books and movies?

As well as being very difficult to escape from, life in Alcatraz was very hard.

Inmates (the most famous being Al Capone, who was there from 1934 to 1939, and Robert Stroud - Birdman) spent almost the entire day in small cells of 1.5 x 3.7m (the insulated ones were slightly larger) and had to scrupulously respect the internal rules of the prison to earn even the most basic things, such as work and family visits. In fact, only those who earned it were entitled to a few hours of fresh air, which were spent working, giving them the possibility of only being in a cell 19 hours per day! The only positive note is that the food was supposedly rather good in Alcatraz!

If the inmates wanted to escape, after passing the iron grip of the guards, they would immediately be confronted by the strong currents of the bay, the tides and the cold water temperature, which would make the crossing extremely difficult. Nevertheless there were several famous escape attempts: 36 men were involved in 14 escape attempts, 23 of whom were caught, six shot and two who drowned in the attempt. The most famous attempt was the theme of the famous Clint Eastwood film "Escape from Alcatraz", which tells of the adventures of Frank Morris and brothers John and Clarence Anglin, who fled in June 1962, thanks to an intricate plan, and who were never found. May 2, 1946 is remembered as the first day of the so-called Battle of Alcatraz: a plan was developed by six inmates who managed to stir up a revolt, with order restored after two days with police and navy intervention.

In less than thirty years, Alcatraz became the most famous prison in the United States.

After the closure of the maximum security prison in 1963, Alcatraz continued to be talked about thanks to the occupation, in November 1969, by a group of Native American Indians who took the name of "Indians of All Tribes”, declaring the island "Indian territory” and implementing a protest to bring public attention to the plight of Native Americans in the United States.

The history of Alcatraz and of those who lived it is really fascinating, making a visit fully worthwhile: the only tour that takes visitors to the island is offered by Alcatraz Cruises, which is the only official website that runs the tours. The tour takes a minimum of 2 and a half hours (including the ferry crossing that leaves from Pier 33 in San Francisco) and offers you the chance to participate in a day or night tour. The night tour is the most complete because it allows you to go around the island by boat, in addition to the regular tour named "Doing Time: The Alcatraz Cellhouse Tour".

However, if you plan on spending a day in the shoes of an Alcatraz guard or inmate, be aware that there aren’t too many tickets for each day, and places fill up fast. IT’s best to book them well in advance on the official site.

Without the need to order quite so far in advance, (up to 48 hours before departure) you must remember to apply for your ESTA online, which, together with a valid passport, will allow you to enter the USA for up to 90 days.