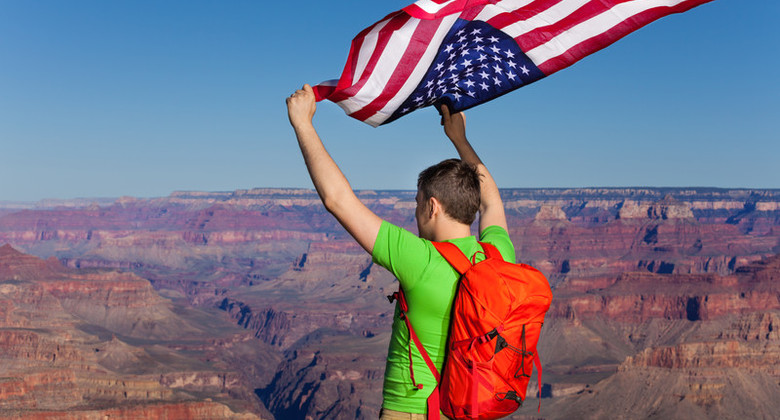 The USA is a vast country with a relatively young but incredibly rich history, and a great reminder of this is the amazing celebration that is 4th of July. Though they may be celebrating their breakaway from the United Kingdom, this is still an excellent opportunity for Brits to get a glimpse of true American patriotism, and certainly something to join in with. Thanks to the Visa Waiver Programme, you can travel to the USA with ESTA and check it out for yourself.

No date is more anticipated in the country than Independence Day, also known as 4th of July. The celebration stems from the signing of the Declaration of Independence on (surprise!) the 4th of July 1777. A year after the signing of the declaration, Philadelphia would be the first place in the country to remember this mirthful moment in history by crediting the anniversary with activities such as the traditional 13 gun salute (which is still held to this day), fireworks, music and parades. The docked ships were decorated with the red, white, and blue bunting we’re now used to.

Over 200 years later, the desire to celebrate this day with all the bells and whistles is as strong as ever across the breadth of the country, but every state imparts its particular local flavours in such a way that there is something appealing for travellers across the entirety of the country.

If you are in…


It is no surprise that Philadelphia is called the birthplace of America as it was here where the signing of the Declaration of Independence took place in 1776. Philadelphian locals take the date  very seriously and celebrate the holiday during six consecutive days of festivities. Beginning 29 June and lasting until the evening of 4 July, the entire city is clad in Americana and offers myriad activities such as free concerts open to the public, one of the brightest firework shows in the country, endless parades, a number of outdoor movies, their world renowned District Block Party, and activities for children of every age. A must-see!
What to eat: What, you’ve never had a hoagie? The hoagie is Philadelphia’s version of the sub, but so much more delicious and juicy than any subway iteration you’ve ever tasted; chock full of Italian cold cuts and cheese, veggies and peppers, inside a lighter-than-air roll that is crisp on the outside and nice and soft inside. Every year, Philadelphia hosts the Wawa Hoagie Day, offering an incredible five tons of hoagies to its hungry 4th of July visitors. Hoagie day will be held, like every year, at the Independence Visitor Centre and the National Constitution Centre.
Don’t forget to also partake in the free American Flag themed birthday cake and cupcakes that will be given out on the last day of the festivities.
Where to see the lights: The Benjamin Franklin Parkway will host the annual fireworks show on the 4th of July and it is a must-see if you’re lucky enough to be in the city this time of the year.


If you’ve never been to the Big Apple (or never had a chance to brush up on its history), we can think of no better way to spend the 4th of July than taking a Walking Tour, which will take you on a leisurely stroll through some of the city’s most iconic spots.

Where to eat: New York is arguably riddled with some of the best restaurants in the world, and you will not be left without interesting options, themed for the occasion. But, rather than point out the usual culinary suspects, we’re going to suggest doing something a little different in this city of stark contrasts.

Independence Day is the perfect day to pay to make a little day trip and pay homage to the humble and underrated hot dog. Nathan’s famous hotdogs holds a hot dog eating contest in the original location on Coney Island every year on this day.

Looking for something a little glitzier? The Dutch holds a yearly Fourth of July Hawaiian style luau where you can feast on a succulent pig roast with all the typical Hawaiian trimmings, along with typical cocktails such as macadamia Mai Tais.

Where to see the fireworks: Macy’s never disappoints, holding a yearly 4th of July Fireworks over the East River between 24th and 41st streets, which is guaranteed to knock your socks off. The show typically begins on 9:25pm (come early to get a great spot) and lasts about 30 minutes.


If you find yourself in Boston on the 4th of July this year, the place to be is Harborfest. For the last 36 years, Harborfest has been the place to be for the 4th of July celebrations in Boston. For the entire five days leading up to Independence Day, you can enjoy festivities such as live music, realistic historical re-enactments, Freedom Trail Walks, tours and boat trips. Boston’s Revolutionary War history and cultural heritage create the perfect setting for Independence Day celebrations. Every year, nearly three million visitors from all over the world come to take in what the city has to offer, and to see one of the largest 4th of July festivals in the country. You must also visit Paul Revere’s house and hear all about his famous Midnight Ride.

Where to eat: You cannot spend summer in New England and not sample an iconic plate of fried clams — usually accompanied by onion rings and fries. If clams are not your thing, you can indulge in a nice boiled lobster (a crowd pleaser, you can usually choose the one you like at the restaurants) painted with delectable butter.

Where to see the fireworks: Do not miss out on the free Boston Pops Fireworks show, which takes place every year at the banks of the Charles along the esplanade.


Miami has a younger vibe, as it was not officially incorporated as an American city until 28 July 1896. As such, we do not expect the same old news from this city as anywhere else in the country.
We know we’re talking about the USA, but let’s face it, nothing screams Miami more than a Cuban sandwich. Due to the high influx of Cubans into this city, the food fare there is not quite like anywhere else in the USA. Nestled inside a fresh Cuban bread, you will find yellow mustard, roasted pulled pork, baked ham, melted cheese and delicious dill pickles. The perfect takeaway solution as you go to see the lights.
Where to see the fireworks: Miami sprawls out over so much land that the opportunities to celebrate are boundless. For example, Homestead holds an annual party right on the Homestead-Miami Speedway. From about 6 to 10pm you can enjoy free live music, food trucks, and activities for children, before enjoying the sunset fireworks of course.
Some last words
Remember to enjoy the 4th of July festivities responsibly. If you are drinking, do so responsibly and beware of lighting fireworks in areas that may be prone to fires. The fourth of July is meant to be fun for everyone, so remember to be respectful of everyone out and about, wherever you are.
Apart from partaking in one of the greatest festivities in the US, you will also need to apply for your ESTA in advance in order to ensure a smooth, uneventful entry into the USA. As a Brit, you are a citizen of a Visa Waiver Programme member country, which means you can apply for your ESTA online and get a response within 24 hours. The ‘ESTA’ (Electronic System for Travel Authorization) is meant for people visiting the USA, as tourists or on business, who plan t stay for periods of up to 90 days at a time. With ESTA, you can forgo all the hassle and expense of applying for a traditional US visa.
Once your ESTA has been approved, you will be able to visit any US location as many times as you like within a two-year period (each individual trip must always be 90 days or less, and as long as the purpose of your trip adheres to the conditions of the Visa Waiver Programme). Make sure your passport does not expire during this two-year period, or your ESTA will automatically expire as well, given that your travel authorisation date is taken directly from the specific details of the passport used for your online ESTA application. When these two years expire, you may apply for another ESTA online just as easily, making it much easier, and a whole lot more affordable than applying for a US visa.