Ecotourism in the USA 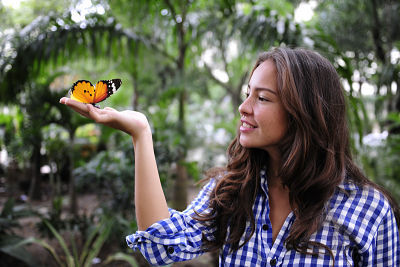 As monarch butterflies will soon become a protected species in the USA, there is little time left to visit their observation sites in the States.

The monarch butterfly is a species that is notably found in North America. Each year in autumn, millions of monarch butterflies take flight from Canada to migrate south towards the forests of the Mexican region of Michoacán. Their voyage takes around two months, during which they can migrate up to 5000 kilometres. That’s almost as long as a flight from London to New York!

It’s their time in the USA that interests us, as en route to their final destination, the monarchs must stop off in the USA. Unlike British citizens they don’t require ESTA authorisation to make their transit, however their journey is by no means exempt from complications: conventional agriculture has a devastating effect on butterflies. So, many groups defending monarch butterflies in the USA have created a petition for the American government to protect these insects via the Endangered Species Act.

Since the 1990s, the habitats lost by the monarchs are estimated to be around the equivalent of the size of Texas, the largest state in the USA. Marcus Kronforst, a researcher at the University of Chicago, stated “we could be witnesses to the end of an incredible biological phenomenon, which these small insects have successfully carried out annually for the last two million years”.

But who is responsible for this imminent ecological catastrophe? Among the culprits, the well-known Monsanto Company is highly suspected, whose flagship product ‘Roundup’ and genetically engineered crops have destroyed the monarchs’ habitat: to reproduce, these butterflies must lay their eggs in the ‘weeds’ found at the heart of these crop fields.

In the 1990s, one billion monarch butterflies migrated from Canada to Mexico. In 2014, there were less than 35 million. According to Tierra Curry, a researcher at the Centre for Biological Diversity in Arizona, the decrease in monarch butterflies is so extreme that “just a couple of bad storms could really send the population into an irreversible decline.”

Amateur entomologists or simply lovers of beauty and nature, if you want to witness this marvellous phenomenon, you will need to hurry up, as we don’t know how much longer it will last. The legal protection of monarch butterflies could be implemented within as little as two years.

The monarchs’ departure to the south begins at the end of August in Canada, and ends around December. They start heading back up through the USA from Mexico at the start of March, and are therefore visible throughout the southeast of the USA (Texas, Louisiana, etc.). Then, they fly a little throughout the USA and reach Canada again.

The Monarch Watch programme from the University of Kansas has made a list of monarch butterfly observation sites available for admirers.

On hot, sunny days, American skies are dressed in orange.