Exploring Space from the United States 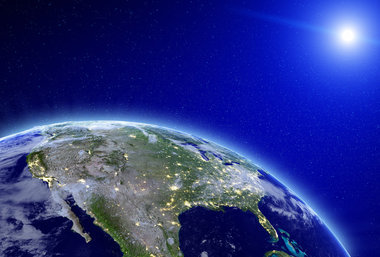 We have been exploring outer space for decades, with increasingly sophisticated tools that have allowed us to open our eyes to unknown realities. Such great achievements make us feel smaller and smaller when compared with the limitless universe that surrounds us.

News announced just a few days ago has alerted us to the fact that Earth may have an older ‘cousin', which is very similar in many aspects. NASA said that this planned, known as Kepler 452b, is located in the habitable zone of a star system some 1400 light years away, in the Cygnus constellation.

It's been dubbed our ‘twin’ because, among all of the exoplanets that have been analysed, it is the most similar to Earth in terms of its size, orbit time, potential presence of water, and the distance from the star that it orbits. As this system is studied in more detail, it will surely give us more information about how are relatively young planet may advance as it grows older. This is because the star that it orbits is around 1.5 billion years older than ours.

Will we ever go there? Probably not. The planet is 1400 light years away from our planet, which is a little extreme, even when travelling at the speed of light! Well, if we can't set foot on Kepler 452b, perhaps we can visit the United States instead, which is home to many ideal spots for astrophiles. As British citizens, all you need is a valid passport and ESTA authorisation.

For space enthusiasts visiting Capa Canaveral, Florida, the Kennedy Space Center cannot be missed. The centre is just under an hour's drive from Orlando, located on Merritt Island. The huge site is home to observation towers and launch platforms. Here, you can witness the largest rocket ever launched, touch a real moon rock, meet veteran NASA astronauts and more.

Next to the Kennedy Space Centre is the Cape Canaveral Air Force Station, which is the east-coast launch spot for the US Defence Department. The ‘Kepler' telescope was launched from here in 2009, which is what discovered Kepler 452b just days ago. A small part of the military station is open to visitors, including the Air Force Space and Missile Museum and the historic Cape Canaveral Lighthouse.

Over in Texas, enthusiasts can visit the Lyndon B. Johnson Space Center, theNASSA Mission Control Centre for all manned space flights. It can be found 40km southeast of Houston, which is why astronaut messages begin with the word ‘Houston’. The most famous case of this is undoubtedly “Houston, we’ve had a problem”, announced during the failed Apollo 13 mission.

There are also several highly important space centres across the rest of the USA:

So, are you ready for an exciting adventure among the stars? Fortunately you won't need a spacesuit; instead, you just need to have a valid passport, and apply for your ESTA online, which will be ready in just a few hours.