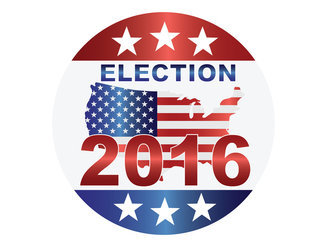 Perhaps of little surprise to those following US politics, former First Lady and Secretary of State, Hillary Clinton, has just announced that she will be running for President in 2016.

The presidential run is always a fascinating time to visit the States, as Americans typically display their political alliances loud and proud. The campaigns are exciting and nail biting, and thanks to the Visa Waiver Programme, UK citizens can visit the States and witness the process for themselves, by simply requesting their ESTA authorisation online in advance.

Hillary Clinton rose to fame and power as the First Lady during President Clinton’s terms in the White House. She soon became widely associated with her fight for women’s rights and universal healthcare. Her reputation extended far beyond the USA, with her active attitude towards human rights also drawing in worldwide attention.

Despite seeking the nomination for the presidential election in 2008, she lost the vote to Barack Obama. Nevertheless, her pivotal role in the Democratic Party has been crucial throughout Obama’s terms in office, which is yet another foundation for her campaign. Despite having been involved with controversies in the past, Clinton will be looking to redirect voters’attention towards the future, and it looks as though she will centre her campaign around ‘ordinary’ Americans and the everyday struggles of the middle class.

A name that is known to most, particularly in the USA but also abroad, there are unlikely to be many voters on the fence with regard to Hillary’s potential presidency; she will undoubtedly receive a contrasted blend of enthusiastic praise and harsh criticism during her campaign, but current President Barack Obama has already expressed his full confidence in her, so that’s one vote taken care of already. The 67 year old will hold her first rally next month, and will undoubtedly be focusing on the game-changing state of Iowa before then, which has always been a state of particular importance for campaigning.

Of course, British citizens don’t get a say in the vote, but can certainly visit the States during the build-up! Visitors travelling for business or tourism purposes for less than 90 days no longer require a visa, and simply need to request their ESTA authorisation online, which is delivered within 24 hours via email.

May the best party win!