The origins of Las Vegas, Nevada 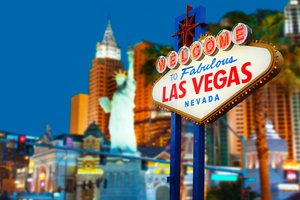 For those visiting the western United States, Las Vegas, Nevada, is an absolutely mandatory destination, because there are no words or pictures that can truly live up to what is genuinely The Entertainment Capital of the World .

But what are the origins of this marvellous place, which welcomes over 20 million visitors every year? Travelling to Las Vegas is far easier than you think thanks to ESTA travel authorization!

Looking at modern day Las Vegas, it is hard to imagine a dry and dusty place, inhabited by the Anasazi and Paiute tribes for centuries. Its 'discovery' was attributed to Hispanic-Mexican explorer Rafael Rivera, who, in 1829, stumbled upon the waters of the Las Vegas Spring, which was found along the way to Los Angeles (some 450 km away). The place was named "Las Vegas", which translates as "the meadows" or "the fertile plains".

Because of its strategic location halfway between Salt Lake City and Los Angeles, Las Vegas was chosen by Mormons in 1855 to erect a fort to be used for collecting food. The structure was abandoned several years later.

The presence of water did slowly draw attention to the land, as caravans began to pass through regularly, eventually creating a small village in around 1905. This was around the time that the construction of the Pacific Rail road began, connecting Los Angeles with Salt Lake City. Consequently, many workers chose to settle in Las Vegas for the duration of the work.

In 1911, as the railroad was extended, the "railway village" of Las Vegas was recognised as a "city", (adopting its first charter of public law).The city began to expand and became more attractive for its first visitors, thanks to its vast natural beauty.

For decades, Las Vegas was a rest stop for caravans of pioneers headed to California, and, in the early years of the twentieth century, it was an important railway junction, via which the surrounding mines were sending their products to the rest of the country.

But the "luck" of Las Vegas began when, in 1931, the State of Nevada abolished the ban on gaming, which coincided with the completion of the railway link with Salt Lake City. The town was filled with small casinos, which were easy attractions to workers who, in search of fun, ended up betting away their salaries. This was the case, for example, with those working on Hoover Dam, which was under construction around this time.

A place like this was always destined to have an appeal with those in the criminal underworld, the most famous example still being Benjamin "Bugsy" Siegel, a fascinating and mysterious man whose "criminal career" began in New York, along with Meyer Lansky, who together created a ruthless gang and ran a group of brutal killers.

On December 26, 1946, Siegel opened the first casino hotel in Las Vegas, the infamous"Flamingo Hotel", which greatly contributed to the birth town's legendary status, and was built with money from the New York Mafia. This luxury hotel offered all sorts of fun with regard to gambling, and today it is the oldest resort in Las Vegas. In the following years, the Flamingo became a model for other resorts linked to crime.

On May 4, 1955, the "Moulin Rouge" casino hotel opened, the first to allow racial integration between white and black patrons, and in 1959, designer Betty Willis created the famous "Welcome to Las Vegas" sign, which has still never been registered as a trademark.

In the 1960s Las Vegas expanded further thanks to a range of powerful investors. Gambling games eventually became considered simple games, reinforcing their status as a legal activity. During these years, a list of people to be denied entry into the casinos was established, better known as the 'Black Book'. John Kennedy Fitzgerald and his brother Robert, an attorney general, implemented a programme to fight organised crime, which involved intercepting the gambling halls of Las Vegas.

Soon, luxury casinos and majestic hotels began to bloom, most of which are concentrated along the famous Las Vegas Strip. These facilities include the famous Caesars Palace, whose atmosphere is reminiscent of the Roman Empire; or the Luxor Hotel, a 30-story high pyramid of black glass and steel, with statues that imitate the Egyptian style. From dusk to dawn, the hotel emits an impressive beam of light pointed towards the sky. Then there's The Venetian, a hotel inspired by the city of Venice: the complex has water channels that recreate the atmosphere and gondoliers of the Italian city, and allow visitors to steer a gondola around the expansive grounds.

In addition to becoming the "capital of gambling", Las Vegas is a hugely popular spot to get married, with very little red tape! More than 144,000 weddings take place every year in the city! The law of the state of Nevada is very liberal with regard to both the time required between the submission of the application for marriage (a few hours), and the age of the couple (in some counties you can get married at 16 or 17 years old). The person must not be married in local or national registers, and, if from another country, must declare his or her own civil status independently.

In fact, many "wedding chapels" have appeared over the years, which can be secular or of a religious nature, including dedicated chapels for Mormons, Christians and Jews. "Wedding packages", can be purchased, but be careful, because, among the multitude of chapels, the photos are not always faithful to the actual location, and you could risk finding yourself in an abandoned car park or in an old run-down motel for your wedding!

To be on the safe side, choose one of the most famous chapels if you're planning to tie the knot in Vegas! Among these, the Little White Chapel stands out, where you can also get married riding a bike or whilst sat in your car (Drive Thru Wedding).

Among the more bizarre events that Las Vegas hosts, we ought to mention one that took place recently: the "Viva Las Vegas" rockabilly festival, that takes place each year at the New Orleans Hotel and Casino, which is dedicated to lovers of rock 'n roll, burlesque and vintage cars.

And there's not much more that can be said about Las Vegas, the city that came nothing, and which has become the capital of excess and fiction, also nicknamed "Sin City".

You just have to find out for yourself ...! Request your ESTA authorisation and organise your visit to the city of Las Vegas "where everything is possible"!