The Kentucky Derby: “the greatest two minutes in sport” 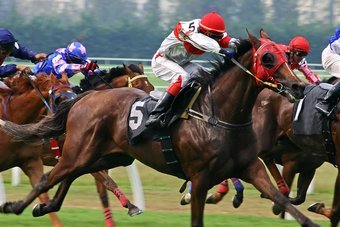 This major sporting event, which has been taking place for the past 141 years, sees thousands of Americans set their eyes on the Kentucky Derby on the first Saturday of May. The Derby is a prestigious horse race which is held annually in Louisville, Kentucky.

Request your ESTA authorisation now and witness this highly unique event for yourself, visiting a part of the United States that is off the main tourist map, and which will undoubtedly blow your mind!

The idea of ​​this event came from Colonel Meriwether Lewis Clark Jr., inspired by the popular horse races in France and England. Back in the Bluegrass region of Kentucky, famous for breeding racehorses, the Colonel built the Churchill Downs, naming it after his relatives, who owned the land on which the track stands.

Since 1875 the Churchill Downs Racecourse has been holding this contest which stars Thoroughbred horses, an Anglo-Saxon name referring to English pure-bred horses. The horses are three years old, and are trained to gallop races of a mile and a quarter (2011.98 metres) in just two minutes. Enthusiasts in the United States also call the race "the greatest two minutes in sport" which has taken place every single year since its debut, through wars and floods, across the centuries and numerous presidents.

The trepidation surrounding the race could not be higher, due to the fact that the horses that run the Kentucky Derby have just one chance; they will not try again the following year, and are only selected following 35 meetings that take place during the months prior to the race.

The Kentucky Derby belongs to the Triple Crown series, along with the competitions of Preakness Stakes in Baltimore, Maryland, and Belmont Stakes in the State of New York: to win all three is considered the biggest achievement possible within the career of its participants.

The Kentucky Derby is preceded by the Kentucky Derby Festival, a festival held during the two weeks prior to race day. The festival was opened in 1935, and went on until 1937, when it was then discontinued until 1957 due to the floods in the area.

The Festival opens with the "Thunder Over Louisville", one of the continent’s greatest fireworks displays, and continues with other attractions such as the “Great Balloon Race”, marathons for adults and children, as well as numerous other sporting events and music, which are free for the most part. In short, the festival is two weeks of fun in the name of spring and tradition!

The Thursday before the race is the "Taste of the Derby", a tasting extravaganza where competing chefs come from the four corners of the US, from Miami to Los Angeles, from New York to New Orleans. On the Friday, the ‘Kentucky Oaks’acts as the dress rehearsal, which raises money for breast cancer research. On the Saturday, at half past six in the evening, finally the Derby itself kicks off, following a performance of the sentimental ballad "My Old Kentucky Home".

The Kentucky Derby is not just a horse race, but also a social event that boasts a series of traditions that have gone unchanged over the years and which attract thousands of spectators, including one tradition which entails women wearing the most extravagant variation of hats.

Another tradition of this highly prestigious event is the Mint Julep, a cocktail made from crushed mint, sugar syrup, water, bourbon and ice. The cocktail varies in its proportions, allowing it be a simple refreshing drink in the version with little bourbon, or a highly alcoholic cocktail. The cocktail also has its very own metal drinking vessel: the Julep Mug.

During the Derby of 2006, extra-premium Mint Juleps were being sold at $1,000 each: they were served in gold-plated cups with silver straws, and made with Woodford Reserve bourbon, mint imported from Ireland, ice from the Bavarian Alps and Australian sugar. The proceeds were donated to retired racehorses.

The hats and the Mint Julep come from fashion of 19th century, when those who went to see the horse races dressed with care and with extravagant hats for sun protection, whilst drinking Mint Julep to cool off from the approaching summer heat.

Another tradition closely linked to America’s most famous horse race is the Garland of Roses, which is what gave the race its nickname "Run for the Roses". The tradition of the roses is said to be derived from a high society event held in 1883 during one of the festivities following the derby, in which all women were presented with a rose. Since then, the flower has become a key symbol of the event. In fact, the winner is given a wreath composed of more than 400 red roses sewn onto green satin and a bouquet of 60 red roses with long stems.

The Kentucky Derby is certainly an event that has an unparalleled attendance across the classes: anyone can participate, at $40 a ticket, by camping in the nearby fields, or you can spend $7000 to experience the race from the VIP stands along with the rich and famous.

After all, the important thing is to be there, even if the thrill of racing and betting only lasts a couple of minutes: the whole context is a huge part of an event that people spend a year waiting for, and which has been repeated for more than a century with the same extravagance and grandeur.