Mount Rushmore; a monument to US patriotism 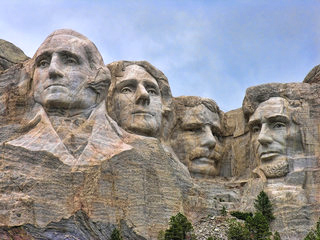 One of the most patriotic sites in the United States is undoubtedly the Mount Rushmore National Memorial, tucked away in the heart of the Black Hills in South Dakota, which receives 3 million visitors each year (mostly Americans) who go there as a sort of mystical pilgrimage.

But who do we have to thank for this masterpiece, and why was it created?

The creator of the monument was sculptor Gutzon Borglum, a first generation American born of Danish immigrants who grew up in Idaho. He was given a "carte blanche" by the historian Doane Robinson, from South Dakota, who had a great piece of work in mind that would incorporate historical figures as its protagonists, such as the Indian chief Red Cloud, or Lewis and Clark.

Borglum, who announced that "American art has to be monumental, like the American life”, had no doubt as to what would be the theme: nothing could be more patriotic than portraying the four US presidents George Washington, Thomas Jefferson, Theodore Roosevelt and Abraham Lincoln.

Work began in 1927 under President Calvin Coolidge and was carried out mostly during summer, finally reaching completion 14 years later. The workers included about 400 people, with an average of 30 workers present at all times. Despite the poor working conditions and tons of dynamite, not a single person died during the completion of the work.

To sculpt the faces of four presidents, who are 18 metres tall and 56 metres wide in total, the workers used guidance models, which were on a scale of 1:12. Dynamite was used to allow them to get within 8-13 inches of the final characteristics of the faces: to refine the details, the so-called 'honeycomb' method was used, in which the workers would drill small contiguous holes with a pneumatic drill, each of a few centimetres deep, creating a kind of honeycomb structure, which was later trimmed by engravers and finally finished and levelled by carvers.

The workers were lifted, lowered and suspended by a steel cable, on the end of which was a special harness, similar to that used by the workers in the shipyards for working hulls. To get from one side of the sculpture to the other, there were also small suspended houses. In most of them there were always models of the presidents' faces, so that the sculptors could keep in mind the sculpting that needed to be done.

The face of George Washington was the first completed carving, completed in 1930, followed by Thomas Jefferson in 1936 and Abraham Lincoln in 1937. The face of President Theodore Roosevelt, a friend of Borglum, was the last to appear in 1939.

The end result is a grand and imposing piece that celebrates American patriotism (although it has long been considered a monument of strong northern pride, especially due to the presence of President Lincoln's chest; the man who promoted slavery abolition laws), and has radically altered the natural landscape in the name of art and history.

The park is open every day of the year (except December 25 when all the buildings are closed, although access to the park is still open). Here you will find the official opening times, divided into two seasons. The site is particularly impressive in the evening, when the light of the sunset across the entire site make it look even more solemn and majestic.

Also, the Crazy Horse Memorial is just a short distance away, which is still under construction, and is aimed at celebrating the native Indian population through a sculpture that depicts one of the most famous chiefs of the past. Once completed it will be the largest sculpture ever built in the rock, with a width of 195 metres and a height of 172 metres.

Reading this has surely left you with an aching desire to go and see this striking piece of history and art. Well, thanks to the Visa Waiver Programme that's perfectly possible, all you need to do is request your ESTA and book your flight!