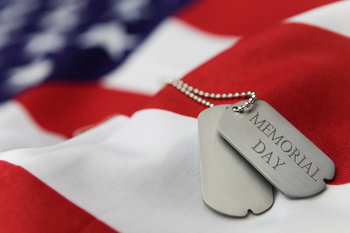 We know that the United States is a very patriotic country and that celebrations recalling important historical events are held in high regard: Memorial Day is one of these occasions and takes place on the last Monday of May.

It’s an event that remembers the men killed in war, and which dates back to the American Civil War (1861-64), when citizens began to place flowers on the graves of their fallen soldiers.

The Civil War saw more deaths than any other war, including soldiers of the Union and the Confederate states, and marked the first need to set up national cemeteries to give proper burials to the many Americans who died for their country. Honouring the graves of soldiers who died in the war was a habit that arose spontaneously, especially during the spring, when they used to decorate the graves of fallen soldiers with flowers. This habit then led to the establishment of "Decoration Day", which became official in many states of the country.

The day was chosen by General John A. Logan, who announced that May 30, 1868, was a day dedicated to decorating the graves of comrades who died defending their country. The date of "Decoration Day" was chosen because it was not the anniversary of any battle in particular, and therefore it was suitable to remember everyone who died in the Civil War.

During the first "Decoration Day”, General James Garfield gave an important speech at the Arlington National Cemetery, and 5,000 volunteers decorated the graves of 20,000 American soldiers. The example was followed by many other States and the celebration became official. Actually, it was first formalised in the northern states, while the southern states decided to honour their dead on other dates.

Later, during the two World Wars, the United States experienced many losses on the battlefield and "Decoration Day" became an occasion to remember those who died, and the date of the anniversary was always May 30, until, in 1968, through the ''Uniform Monday Holiday Act", Congress assigned certain festivals to various Mondays throughout the year, to give civil servants a ‘long weekend’. That's why "Decoration Day" was "moved" to the last Monday in May and took the name of "Memorial Day”, as it became a national holiday in which the city of Waterloo, NY, was officially declared its birthplace by President Lyndon Johnson. At this point, even the Southern states recognised this event, since it was now dedicated to Americans killed in any war, and not just the Civil War. That being said, some states still have other dates during on which they honour those who died from the Confederation.

Patriotic parades take place on this day (among the most important are those of Chicago, Washington and New York) and visits to cemeteries and war monuments are made, in which many volunteers leave flags and flowers.

Since 2000, the day has incorporated the "National Moment of Remembrance", which calls upon all Americans to observe a moment of silence and respect at 3pm (local time in each State), where it is common to hear the “Taps" melody played on the trumpet.

Aside from the patriotic and official nature of the event, the long Memorial Day weekend, falling at the end of May, and thus, the end of Spring, is seen as the beginning of Summer for many Americans, and as an opportunity to organise outdoor trips and barbecues.

When talking about Memorial Day, we mustn’t forget about the sporting event closely linked to this weekend:  The Indianapolis 500, an American car race which began in 1911, and which takes place during the same weekend at the “Indianapolis Motor Speedway”. This year it will be held on May 24.

The cars that will compete are very similar to those of Formula 1, but with many technical differences, and are known as IndyCars. Upon hearing the phrase "Ladies and Gentlemen, start your engines!", drivers compete for first place after 200 laps (500 miles), but only after winning their participation in the practice sessions that take place during the month of May. Of course, this sporting event is surrounded by a rich variety of events ranging from marathons to concerts, all taking place in the city of Indianapolis!

Again, we are sure that we’ve encouraged you to experience another unique experience overseas: a chance to enjoy the famous American patriotic pride, but also its iconic driving events. You can get your ESTA here and have it within just a few hours, giving you the peace of mind and necessary documentation to enjoy your new adventure!