The USA, home to some of the friendliest cities 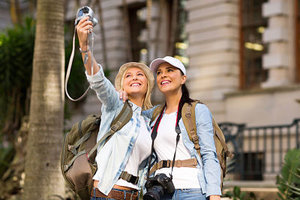 You just need to request ESTA authorisation online and within a maximum of 24 hours you will be ready to set off to unforgettable destinations.

During your trip to the USA, don’t miss out on the two of the most welcoming cities in the world.

The USA has the honour of being home to two of the cities featured on this list, and no, it’s not any of the big metropolitan cities like New York or Los Angeles. Rather, these are smaller cities, full of history, and both found on the east coast.

The cities are Savannah, in Georgia, and Charleston, in South Carolina, which won 9th and 4th place respectively.

Not only are these cities known for being welcoming, but they are also known for their history: Savannah and Charleston are both the oldest city in their state. These are cities that formed part of the first 13 colonies in the USA (1607-1732). Their well-preserved architecture is also a major appeal, including buildings that date back to before the Civil War.

These are both port cities, dotted with plenty of small canals and streams. Savannah is crossed by the river of the same name. Both cities are surrounded by nature reserves, which are certainly worthy of a visit (the humid sub-tropical climate means that there is a vast variety of oak trees there).

Remember the phrase ‘life is like a box of chocolates’? Well, Forrest Gump said those words in Chippewa Square in Savannah. You’ll recognise it without a doubt!

Savannah and Charleston are just a two-hour drive away from one another.

But a ranking of friendly cities wouldn’t be complete without mentioning the ‘least friendly’ cities too, and perhaps unsurprisingly London is often brought up. Our capital is well known for being a little cold; a place where people don’t quite have the time of day for you!

So, what are you waiting for to escape this lack of hospitality! The USA makes it really easy for you to head there as a tourist.

You just need to request ESTA authorisation online and within a maximum of 24 hours you will be ready to set off to unforgettable destinations.