Visit the beautiful Puerto Rico with the ESTA 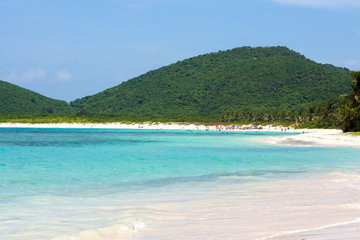 Perhaps not everyone is aware that, along with an electronic passport, we brits require an ESTA, Electronic System for Travel Authorisation, to travel to the Caribbean island of Puerto Rico.

And so, inhabitants of Puerto Rico are American residents, but are not represented in US Congress, nor in the US Electoral College.

At first glance, it is fascinating to witness the striking "coexistence" between the Hispanic-Caribbean culture (the result of a long-lived Spanish colonisation) and the North American footprint, with its inevitable contrasts.

Also known as the "Pearl of the Caribbean", "Isla Estrella" or "Isla del Encanto”, Puerto Rico is a fascinating island, coated in towering mountains full of lush flora, and surrounded by other small islands. It is the largest island of the Antilles, located between the Caribbean Sea and the Atlantic Ocean, east of the Dominican Republic, and offers an ample variety of options for all visitors.

San Juan, the capital of Puerto Rico, was founded in the first half of the sixteenth century by Juan Ponce de Leó. It is a lively city with a population of over a million people, and can be found in the northeast side of the island. San Juan displays a clear contrast between the concrete skyline and the "old" urban centre, El Viejo San Juan, with its remarkable selection of colonial architecture, making it one of the richest centres of Caribbean history. Here you will find beaches, luxurious hotels, chic bars and casinos, whilst a short distance away you can discover picturesque corners of the city that appear to have remained unchanged for centuries. Among the many historic buildings, the strongest fortress of the Caribbean can be found at the Castillo de San Felipe del Morro.

Ponce is the second largest town, on the south coast, at the foot of the Cordillera Centrale, which is less touristy and an iconic representation of the Caribbean lifestyle. It has a colonial centre with beautiful neoclassical architecture. The city is also known as "Ciudad Señorial" because of these elegant buildings. Just outside the city you can also visit a former coffee plantation: the Hacienda Buena Vista.

For nature lovers, you can’t miss a trip to El Yunque National Forest, in the far north-east of the island. Puerto Rico’s largest rainforest is wrapped around the ‘El Yunque' mountain, which is over 1000 metres high. El Yunque is a nature reserve, rich in tropical vegetation, where you can see large waterfalls and discover amazing varieties of flora and fauna.

On the opposite side of the island is Rio Camuy Cave Park, characterised by the presence of numerous underground caves and grottos. Moving southward, the land becomes barren and rocky, incorporating landscapes such as the Forest Arida of Guanica, which is very typical of the coastal, tropical climate.

But perhaps the best known resource of the island are the stunning beaches. Here we shall mention a few suggestions with respect to the wide choice that Puerto Rico offers.

The beaches of Condado and Isla Verdein Puerto Rico are located on the north coast, near the seafront of San Juan. Also on the west coast, Cerro Gordo in Puerto Rico and Vega Bay Beach are beautiful white sand beaches, lapped by turquoise sea and beautiful crystal clear waters. In general, the Northeast area is a paradise for surfers, both amateur and professional.

The south-west is a must' for lovers of fine sand and turquoise water, and for diving enthusiasts. Among the small corners of paradise you will find Playa Tamarindo, Playa Ballena (Guanica) and the island of Mona (in the area of ​​Cabo Rojo). Parguera is a fishing village, where the houses are built right next to the see, between islands and mangrove swamps. Many divers visit the area, and visitors often make the trip to Bahia Fosforescente (Bahia Night Glow), where millions of microorganisms give the water a sparkle effect.

The Puerto-Rican east is remarkable in its natural beauty, such as the amazing Luquillo beach, or the Seven Seas Beach, where you can see the nature phenomenon of turtles’ eggs. You can find more wild and quieter beaches around the Cordillera.

To the west is the renowned Rincon, which is considered one of the world's best beaches for surfing. Between late January and late February it is one of the best spots for whale watching, along with Boqueron.

The smaller islands of Vieques and Culebra, east of the main island of Puerto Rico, are two miniature paradises: Vieques is inhabited mostly by fishermen and shepherds. The most beautiful beaches are Road Beach and Blue Beach, incorporating miles of white sand and generally very few visitors. Culebra is even more primitive and remote, bordered by beautiful beaches of the northern coast, including Playa Flamenco.

Puerto Rico is a very interesting destination, where nature, history, architecture, sea and beaches, full of American spirit, combine to appeal to all visitors. Luxury lovers will not be disappointed as many resorts offer executive options (many also equipped with golf courses). However, be aware that the best time to travel is from late November to late April, with pleasant temperatures and a not-too-troublesome level of humidity, along with little rainfall; the hot and humid season starts at the beginning of May, with increased rainfall, while from June to November you might run into hurricanes or tropical storms.

Our final recommendation: do not forget that you will need to apply for your ESTA online before travelling, with is essentially your key to paradise!